(from left to right)
Mr. Ishida / President of Honda Foundation, Dr. J. Tinsley Oden, Mrs.Barbara Oden, Mr. Nakajima / Vice President of Honda Foundation
The 34th Honda Prize ceremony was held on Monday, November 18, at the Imperial Hotel Tokyo, with 230 participants and guests from the US Embassy, policy makers, scholars, researchers and media people.
This year’s laureate was Dr. J. Tinsley Oden, Director of the Institute for Computational Engineering and Sciences (ICES) at The University of Texas at Austin, U.S.A. for his leading role in establishing the field of computational mechanics.

“THE THIRD PILLAR: The Computational Revolution of Science and Engineering” 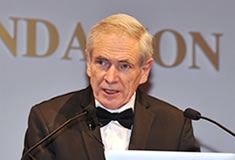 Dr. J. Tinsley Oden
Computational science is an interdisciplinary field and lies at the intersection of mathematics, computer science, and the core disciplines of science and engineering. It can analyze past events and look into the future. It can explore the effects of thousands of scenarios for or in lieu of actual experiment and be used to study events beyond the reach of expanding the boundaries of experimental science, such as in drug design, natural disasters and so on. Following after theoretical and experimental science, computational science has developed as the “third pillar” of scientific inquiry and made it possible to do that classical science cannot.
This development has been achieved mostly through great advances in algorithms using such as the finite element method rather than through advances in the size and speed of computers.
On the other hand, however, every scientific method involves errors since the models in computational science are only mathematical abstractions of reality. Therefore, it is very important to develop ways to estimate these errors, to reduce them, and to control them. I have been working on the subject steadily for many years.
The third pillar is definitely coming to change the way we educate, how we organize and perform research, and how we view knowledge and acquire it. Computational science turned dreams and fiction into today’s subjects which are destined to become true accomplishments of science and technology in the future. 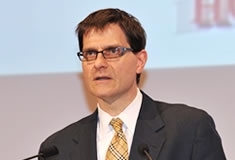 For Her Excellency Mrs.Caroline Bouvier
Kennedy
US Ambassador to Japan 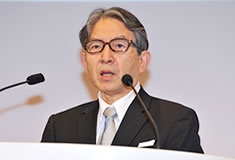