* Information concerning affiliation/post/profile of the laureate is current at the time of the Symposium.

At the international symposium 2007 in New Delhi, innovation experts from Indian and Japanese governments, companies, and universities shared their knowledge, experience, and perspective about strategies to propel social development by linking technologic innovation with entrepreneurship.
The venue in Hotel Intercontinental was filled with about 140 near-capacity participants and their frenzy of anticipation. 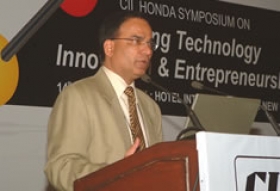 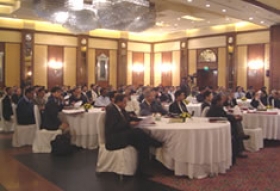 Ardent listeners at the venue.

Japan’s HP member Kisaburo Tokai delivered the keynote address.
The symposium started with the keynote address by an LDP HR member Mr. Kisaburo Tokai, Chairman of LDP’s Research Commission to Promote Research and Establish a Nation of Innovative Science and Technology, who represented the Japanese visiting party. He pointed out many countries including India and China have engaged in pro-innovation policies heavily influenced by fast-spreading knowledge-driven economy. He continued Japanese government also approved pro-innovation strategies, ‘Innovator Japan’, as articulated in the third-term Basic Plan for Science and Technology, with the aim of achieving sustainable development by enhancing the innovative power of public research centers and universities.
Mr. Tokai concluded, as the time-honored politico-economic powers sharing liberal, democratic, and other values, India and Japan have a key role to work together to enable sustainable development of Asia and the rest of the world through environmentally-sounder, more ecotechnological approaches.

On the technical front, Head of Honda R&D’s Fundamental Technology Research Center, Mr. Tomohiko Kawanabe, delivered a special address about “Honda’s Challenges to Technological Innovation.” He introduced enabling technologies behind the production of the HondJet aircraft, hydrogen fuel cell vehicles, and bioethanol fuel. Later the humanoid robot ASIMO appeared on the stage, and exhilarated the audience as “he” was balancing himself on one foot, dancing, and doing other human-like behaviors. The symposium thus ended on a high note. 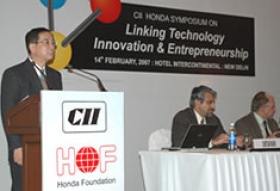 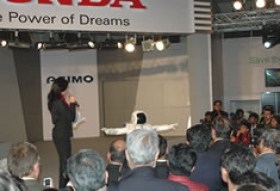 ASIMO entertained the audience.
Transcripts of the symposium will be available later on this website.