The award ceremony for the 4th Y-E-S Award in Vietnam took place at Horizon Hotel in Hanoi on November 25, 2009. Applications came from six affiliated universities, among which two universities joined this year: Hanoi University of Transport and Communications and Vietnam National University Hanoi's Department of Environmental Science. The ten awardees were selected based on their performance records, interviews, and essays. 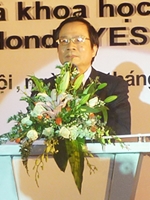 For the past years, there have been 40 Y-E-S awardees implemented by the co-operation of Ministry of Science & Technology, Honda Vietnam and Honda Foundation. 30 awardees in previous years have gained big achievements in study. Many of them study abroad for Master or Doctor Degree.