The award ceremony for the 5th Y-E-S Award in India took place at Le Meridien Hotel in New Delhi on February 28, 2012. More than 400 applications, a large increase from the previous year, came from the seven affiliated IIT schools. They were screened down to 100 based on the performance records and essays. The 12 students were selected for the award after discrete interviews in which they were asked about their essays and aspirations.
At the venue, the awardees were celebrated by many guests including university officials and media people as well as their families and friends. Among the chief guests, Former Chairman, Indian Space Research Organization (ISRO) Dr. G. Madhavan Nair congratulated the awardees. In addition, one 2011 Y-E-S Plus awardee who had just returned from Japan, reported his valuable experience and encouraged his juniors to also go study in Japan. 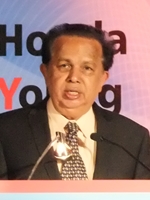 It is technological challenges and demands from society that lead to innovations and new developments. One thing that is very interesting to note is that most of the past inventions, new ideas have come from people in their 20s and 30s.Therefore, this is the field where we have to support and encourage the talent. I think in this prospect the Honda Foundation has really taken the lead. I hope all the award winners today continue your learning and become those global leaders in your respective fields. 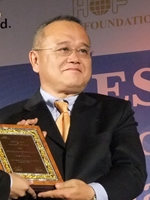 A total of 56 students have received the Y-E-S Award in the past 5 years and many of them have availed the opportunity to visit Japan and complete theirinternship at some of the leading universities and business houses of Japan, using the privilege of Y-E-S Awardees'.
We hope that this exposure would have further widened their aspirations and motivated them to continue their endeavors in pursuit of useful and sustainable application of technology.