The Y-E-S Award in Cambodia reached its fourth year. The selection committee found 4 awardees after careful consideration of essays and interviews. On February 18 2012, Honda Foundation's president Mr. Hiroto Ishida joined the award ceremony at the Angkor-Kizuna Hall of Cambodia-Japan Cooperation Center (CJCC) in Phnom Penh. The ceremony was one of the featured events in the Japan-Cambodia Kizuna Festival 2012 cohosted by Embassy of Japan and CJCC, and attended by approximately 500 people from both countries. 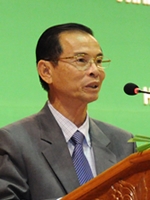 This is my fourth attending in the Y-E-S Award ceremony. I have sympathized with the Honda Foundation's ecotechnology philosophy to balance environmental concerns with economic growth boosted by technological advance. The future of the environment depends on how carefully we will use the great power of science and technology. If abused, it may destroy our future.
The Kingdom of Cambodia has a relatively short history in modern scientific education, so fostering of superior scientists and engineers holds a key to our further growth. As representatives of the Cambodian science and technology students, the awardees here today should always keep in mind that the future of this country rests largely on their shoulders.
For a nation's development, it is important to give young people a wide range of opportunities to learn and better themselves. The Honda Foundation has kindly provided an avenue for future scientists and engineers through this award program. I hope the awardees will seize the chance to continue their research in Japan, and contribute to the advancement of the Kingdom of Cambodia. Today's generation of parents will feel great joy if they see you grow up as a good citizen and national. 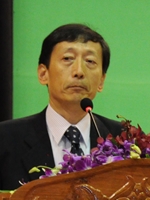 Japan, being a small, resource-poor nation, has advanced with the efforts of its people inspired by a host of visionaries. Among them was Mr. Soichiro Honda. In quite the same way, Cambodia needs outstanding human resources for further economic and social development, especially in the fields of science and technology. The Japanese government, like the Honda Foundation, encourages Cambodian students to go study in Japan. I am certain that attempts like the Y-E-S Award program will help Cambodia advance and bring forth great fruit in the future.