The award ceremony for the 3rd Y-E-S Award in Cambodia took place at CJCC in Phnom Penh on February 10, 2011. Based on their performance records, interviews, and essays, four most brilliant students were selected from the applicants from science and engineering departments of the two affiliated Cambodian universities.
Like the previous years, the awardees were celebrated by more than 300 guests including their families and friends as well as the government and school officials. One of the chief guests, the pro-Japanese Ministry of Education H.E. Pit Chamnan congratulated the awardees for nearly one hour and expressed his gratitude for the program by stating that "Japan that rose from the war's devastation is our model country. This award produced by a foundation in that country is a great source of encouragement for Cambodian students."
The venue was hot with excitement, and envious looks of the awardees' friends reflected mounting expectations of young Cambodians for the Y-E-S Award program. 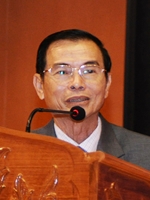 The Y-E-S Award is designed to help foster future leaders for further development of the Cambodian society. Any parents find it a great pleasure to see their children walking down the right path, and this program is precious because it supports them in doing so.
Mr. Soichiro Honda didn't receive higher education; still he created Honda and kept providing globally popular products one after another. School education is important, but it is much more important to get interested in everything, and use your ingenuity to think and analyze human behavior. I believe science and technology would magically improve our future living unless they are used to destroy our environment, society and livelihood.
Thanks to her strong science and technology, Japan remains a global superpower in spite of damages caused by frequent earthquakes, typhoons, volcanic eruptions, and other natural calamities. I hope the awardees will seize the chance to study in Japan, a Buddhist country like ours, and learn various technologies and cultures whether it be your own field or not. Then you will friendly compete with each other as science and technology leaders who forge this country's future. 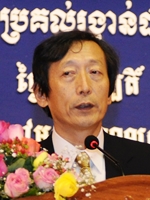 After the Second World War, Japan strove to foster good human resources. The result was those young generations who brought about technologic innovations in various areas. I observe similar things have been going on in Cambodia after the end of the civil war in 1991. Fostering human resources is essential for economic development. I feel very happy with this award program, through financially aiding science and technology students, helps Cambodia build a foundation for creating the base of competent human resources.