The 3rd Y-E-S Award in Laos found two brilliant students among applicants who study science or engineering at our affiliated National University of Laos, based on their performance records, interviews, and essays.
The award ceremony took place in the Assembly Hall at National University of Laos' Faculty of Engineering in Vientiane on January 14, 2011. Before the ceremony, the university's Vice President Dr. Saykhong Saynasine, Honda Foundation's Managing Director Yoichi Harada, and the two awardees participated in the interview by Lao National Television. Along with the selected scenes from the ceremony, these interviews were broadcast in the Laos-Japan Human Resource Development Institute's program.
It is safe to say the Y-E-S Award program has surely helped its awardees seek further possibilities, judging by the fact three of the four awardees for the previous two years are now studying in Malaysia, Philippines, and Thailand. 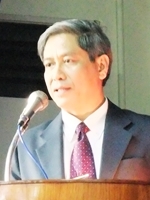 On behalf of National University of Laos, I appreciate Honda Foundation's continued support for our students. Our recent development is remarkable but still in progress, and the advancements in science and technology will determine the future of Laos on a fundamental level. I hope the YES Award awardees will make the most of the great amount of fund granted to them, and improve themselves as the bearers of Lao future. I also expect other participating students to friendly compete with the awardees to fulfill their own dreams. 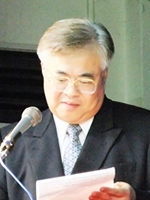 Honda Motor Company was started by Mr. Soichiro Honda a little after the World War II. One of the world's premier manufacturers, Honda Motor is also a leader of robotics development in recent years. In 1977 Soichiro and his younger brother Benjiro put their own money into the Honda Foundation. Their intention was not just the promotion of science and engineering; rather it was a push for changes to ecotechnology toward a higher level of harmony between man and nature.
As the Laos economy is growing fast, I hope everyone here will study hard and always keep in mind how engineering technology can be applied to protect the earth environment. I very much appreciate the National University of Laos for their great assistance and corporation. I hope the country of Laos will continue her progress in higher education of science and technology.