The 7th Y-E-S Award in Vietnam found a total of 87 applicants. From 30 finalists selected at the first round, 10 most brilliant students won the award for 2012. All the 30 finalists were invited to one of the Honda Vietnam production plants.
The award ceremony took place at Melia Hotel Hanoi on December 13, 2012 with more than 200 participants, including the media, the awardees and their families, and the representatives from the government, the affiliated universities, and Honda Vietnam. Each awardee received a medal and diploma with scholarship money from the Honda Foundation, as well as a Honda motorcycle Wave110s from Honda Vietnam. 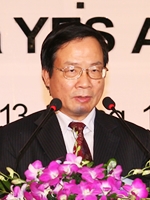 I would like to congratulate all students who enthusiastically take part in the award, and especially those who are the awardees this year. I would also like to send my congratulation to all your teachers and relatives. During 7 years since inception, 70 students have received Honda Y-E-S Award and 5 among them have visited Japan on Y-E-S Plus. Honda Y-E-S Award is a prestigious award with great financial value. Awardees have used it to cover most of their expenses in studying and doing research. Most of the awardees who pursued their higher education overseas have achieved lots of success.
The success of the Y-E-S Award is a positive contribution to the fostering of young talents in science and technology. On behalf of the Ministry of Science and Technology, I would like to express my sincere gratitude for close and efficient cooperation among relevant bodies to establish a successful and honorable award. 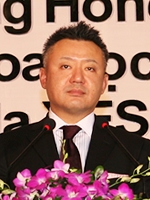 In order to realize the target "to become the company that the society wants to exist," Honda Vietnam Company has, during 16 years of its operation, not only strived to deliver high-quality products to meet the needs of customers, but also contributed actively to the development of Vietnam society through social activities. Realizing that "education is the future of the country," we have made special efforts for improvements in education, and Honda Y-E-S Award is a clear proof of our efforts.
Once again, I would like to congratulate the 10 awardees for the 2012 award. We hope and strongly believe that your youthful dreams and ambitions, and the knowledge you have acquired during your school years, will greatly help your study and research going forward; and in the near future, you will become leading scientists and researchers who contribute to the development and prosperity of Vietnam.