The Y-E-S Award in Vietnam, in its sixth year, found a total of 114 applicants. After 30 finalists were selected in the first stage selection, 10 best students won the award for 2011.
The award ceremony was held at the Hotel Sofitel Plaza Hanoi on November 30, 2011 with more than 200 participants including the media. The awardees were congratulated by their families, the representatives from the government, the affiliate universities, and Honda Vietnam. Each awardee received a diploma, a medal and scholarship, and a Honda Vietnam's popular scooter Wave GS. After the ceremony, Honda Vietnam's general Director Mr. Koji Onishi and Honda Foundation's Managing Director Mr. Yoichi Harada were interviewed for the coverage on news programs on national television as well as the coverage on a featured automobile TV program. 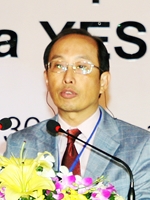 During six years since its start the Y-E-S Award program has been an engine to pick up and foster young talents in science and technology. We have had 50 awardees so far, and many of them are studying abroad in either a master's course or a doctor's course.
I continued to join the selection committee this year, and found it very difficult to choose the brightest from applicants who are in more diverse, highly specialized areas of study than last year. I understand most awardees actively participate in off-campus social activities. Also I am glad that the applicants include brilliant students not only from urban areas, but from rural areas and economically challenged environments.
Let me offer my sincere congratulations to all the awardees and their academic supervisors. This award system offers an additional opportunity, the Y-E-S Plus, and I hope it will be used by as many of the awardees as possible to continue their postgraduate study in Japan. 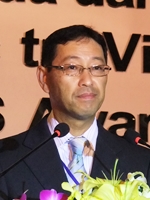 Nearly fifteen years have passed since we started Honda Vietnam. To become "a company people want it to exist," we have provided high-quality products and services to customers. We have also taken part in various other activities that we think would help the progress of Vietnamese society.
In particular, as evidenced in this Y-E-S Award program, our focused efforts have been directed to educational area because a great part of this country's future lies in the improvements in education.
In its sixth year the Y-E-S Award is recognized as one of the major goals for university students in Vietnam. We hope it will continue to encourage young talents and push them toward the fulfillment of their dreams. Lastly I sincerely hope each one of the awardees here will succeed in his or her chosen path.