Honda Foundation hosted its second Honda Y-E-S Forum on November 19, 2016 at The University of Tokyo, Japan; under the theme "Achieving Energy Security through Ecotechnology". With the involvement of the awardees of the Honda Y-E-S Award in Vietnam, India, Cambodia, Laos and Myanmar, this forum was held in the purpose to engage young scientists and engineers from Japan and other Asian countries in discussions on their recognition of regional issues, the role of science and technology in resolving these issues, the development of collaborative ties across boundaries and other topics.

The program consisted of presentations by Y-E-S awardees, industrial exhibition, keynote speeches by top Japanese specialists on energy security issues, followed by a panel discussion. Additionally, a research poster contest was accommodated at the same time, featuring the presentations by applicants and an award ceremony.

◎Presentations by the Y-E-S Awardees

Addressing the current status of energy security issues and resolutions in their respective countries was the core focus of the presentations. The awardees from Vietnam shared about the growth of energy demand and the potential of wind power while the hydropower to deal with future energy trend was mentioned by awardees from Laos. The Indian awardees were talking about renewable energy interventions for energy security. Respectively, energy saving in poor urban settlements was raised up by Cambodia team. The theme of Myanmar was focused on energy pricing policies. The presentations drew much attention from the Forum participants which lead to many questions directed to the speakers. 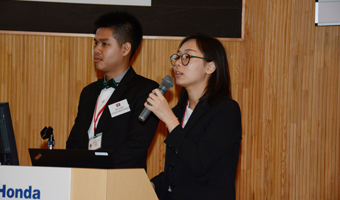 Awardees from Laos give presentation. 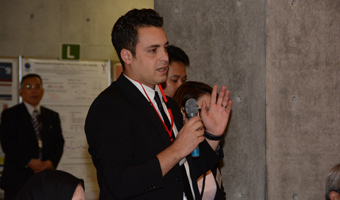 Earnest questions from the audience

◎Presentation by the Y-E-S Awardee Specialized in Energy

It was even more interesting to hear the research presentation by Y-E-S awardee specialized in energy fields, Dr. Nguyen Binh Minh from Vietnam who is currently a researcher at Japan Science and Technology Agency (JST) and the Department of Information Physics and Computing, Graduate School of Information Science and Technology, The University of Tokyo. He stated about saving our planet with electric vehicle from the control engineering point of view including motion control system, visual servo systems, state estimation theory, multi-agent theory and its applications. It proceeded with a very active atmosphere since various questions were emerged at the end of the session. 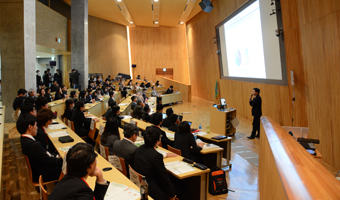 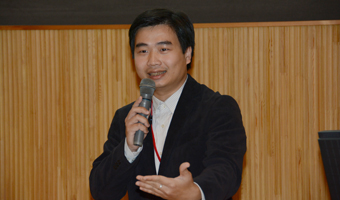 This year, it was very special to have the industrial exhibition from Chiyoda Corporation which is one of the top companies specialized in energy fields including LNG, Oil, Gas and Petrochemical since 1948. There was a presentation from the company's representatives talking about Ecotechnology and energy security of Japan that brought the Forum to be more dynamic and fruitful. 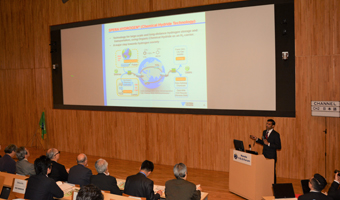 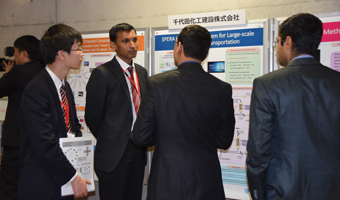 The keynote speeches were given by Dr. Yoshiaki Nakano, Professor, Department of Electrical Engineering and Information Systems, Graduate School of Engineering, The University of Tokyo and Mr. Nobuo Tanaka, President of The Sasakawa Peace Foundation and Former Executive Director of International Energy Agency (IEA). Dr. Yoshiaki Nakano spoke on renewable fuel as the pathway to sustainable civilization. The presentation introduced the research on ultra-high efficiency solar cells and their application to hydrogen and methane production, aiming at the replacement of fossil fuels. Mr. Nobuo Tanaka talked about stormy energy future and sustainable nuclear power. The future security risks by over dependence on oil from the Middle East due to low price of oil and how the nuclear power becomes more sustainable after the Fukushima lesson learnt, were explained. They gave the audience an invaluable opportunity to learn about Japan's achievements and future perspective in resolving energy security issues. 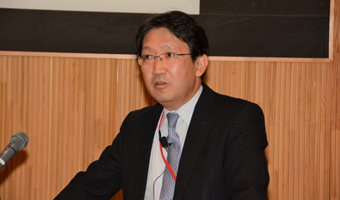 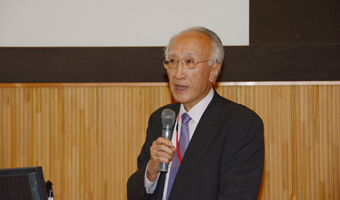 Following the keynote speeches, the panel discussion was arranged after a short break. There were 8 panelists i.e. 6 awardees, and the keynote speakers, Dr. Yoshiaki Nakano and Mr. Nobuo Tanaka. This session was proceeded under the facilitation of Dr. Hirohisa Uchida, Professor, School of Engineering, Tokai University and Executive Director of Honda Foundation. Before starting the discussion, Dr. Uchida delivered a short presentation to provide more understanding about the theme and the meaning of the keyword "Ecotechnology" which is defined by Honda Foundation. At the beginning of the discussion, Dr. Nakano said each Asian county is facing the same main issue such as increasing energy demand and energy supply in the future, and each nation would be nicely supported by the natural energy. However, we probably could find a better solution on how to create a new era of making use of renewable energy in terms of cost and strengths in the future. Also, Mr. Tanaka added that besides the technology, the way of living of people is also an important element to reach the energy security as well as the green community at the same time. In order to accomplish it, collective thinking can be a method. Everyone has to work together toward this common goal. Y-E-S Awardees pointed out that achieving energy security for a future generation requires us to consider both generation of energy and way of utilizing it not only in regional, but in global level. The discussion facilitated by Dr. Uchida drew participation from the audience, evolving into a free exchange of views and productive discussion. 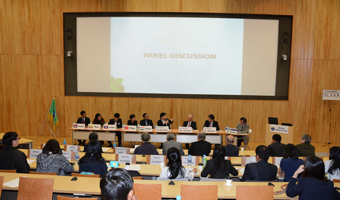 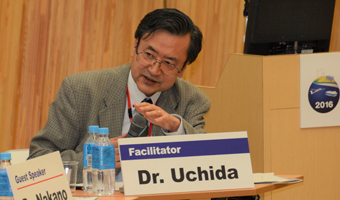 Together with the Forum, the research poster contest was held on the theme of energy security issues, intended to provide participating students opportunities for networking with others and to contribute to share and improve their research. There were 14 posters displayed at the venue and 10 shortlisted posters were invited to present their research during the Forum. 1st and 2nd prizes were designated by the Selection Committee which constituted of Honda Foundation Directors, keynote speakers, and Honda Prize Laureates. The audience award was selected by votes from the Forum participants. By having an overlapping time with lunch break, the poster viewing and discussion were lively taking place between the poster contestants and Forum participants. 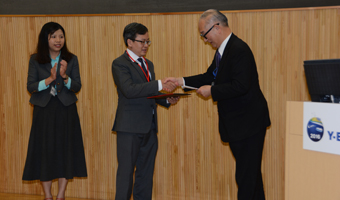 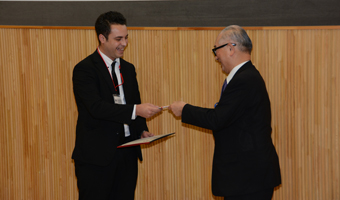 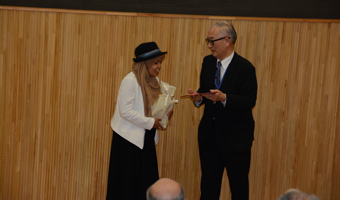 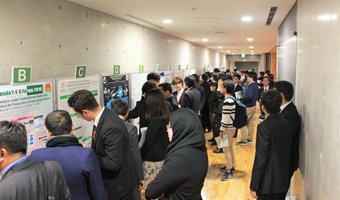 The Forum was planned and managed by Y-E-S Award awardees from various countries on a volunteer basis.