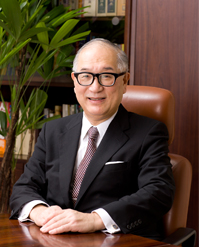 Although technical innovation and economic growth in the 20th century have brought tremendous benefits to our lives, at the same time we have seen a rapid growth in the number of serious and complex problems. The Earth's resources, especially oil, food, and water, are limited. Thus, we can never be optimistic about how long we will be able to use them. Specifically, the problems of environmental destruction, pollution, urban concentration, population/food issues, and a growing consciousness gap between nations/races have emerged. There are numerous serious problems we need to solve on a global scale.

In order to solve these numerous and complex problems, the Honda Foundation was established in 1977 by donations from Soichiro Honda and his younger brother Benjiro, who earnestly hoped that science and technology would develop to the point where we can harmonize the "natural environment" and "human society."

We have held discussions on the challenges the Earth is facing and strategies to resolve them at our series of DISCOVERIES international symposia. We went on to establish the concept of "ecotechnology" in 1979. We started the Honda Prize in 1980, which is an award that honors scientists and engineers who have achieved distinctive results in the field of ecotechnology. The Honda Y-E-S Award program was started in 2006 in the hope that young people from Asian countries will become future leaders in the fields of science and technology.

The Foundation is energetically continuing its activities to analyze modern civilization by bringing together wisdom and effort from international and interdisciplinary approach to discuss and reflect on global challenges. We aim to use the results to promote human welfare and happiness and "to contribute towards the creation of a truly humane civilization" based on recognition of the need to strive to create a higher level of humane society.