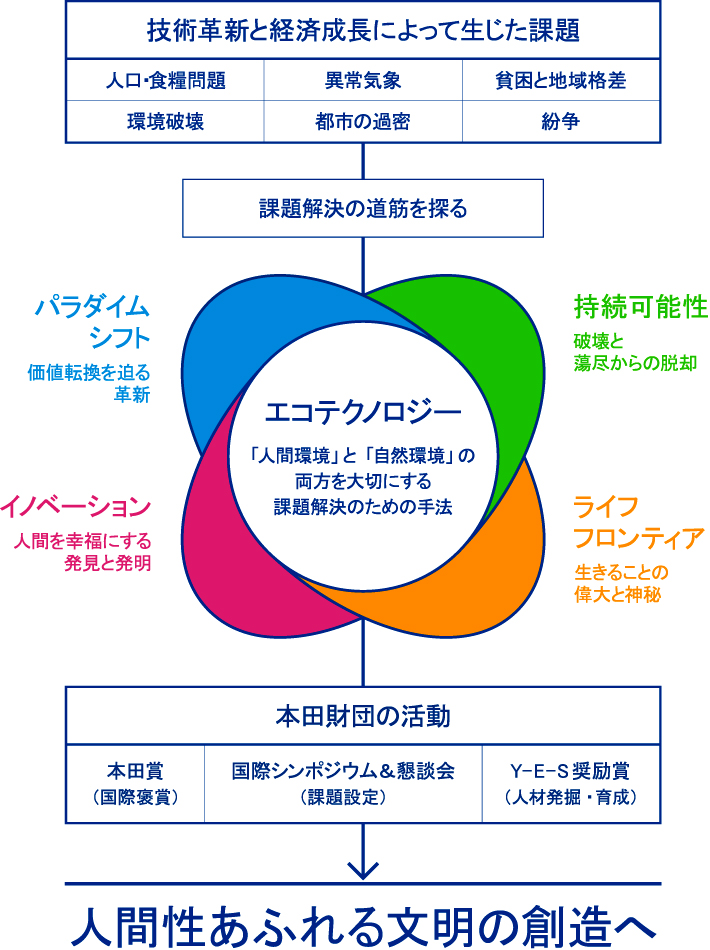 In "contributing towards the creation of a truly humane civilization," the Foundation believes that a completely new approach is required in the search for a resolution.This new method has been called "Ecotechnology."

Ecotechnology implies something more than just "being friendly to the Earth," which is the meaning that people often associate with the word "ecology" today. Ecotechnology is a technological viewpoint developed in response to the needs of the age?a philosophy that shows people new ways to look at, create, and treat things in their lives in society.

Attention must also be paid to harmonizing science and technology with the human environment. We should be in a leadership position in the progress of science and technology. The headlong pursuit of technological advancement in the name of convenience and universality is rendered meaningless if it ignores this important fact and threatens the diversity of life and regional cultures.

With social issues changing with time, if ecotechnology is to harmonize the human and natural environment, it must be versatile in resolving these issues. For this reason, the Foundation has decided to pursue its activities while assessing the various issues from four perspectives: "paradigm shift," "sustainability," "innovation" and "life frontier."

How are we able to hand o n a b right f uture to our c hildren? A nd w hat are t he ethical qualifications and skills required of the researchers engaged in science and technology?

We need to continue to deliberate on these questions.

Industrial activities that exceed the planet's own self-cleansing capabilities have led to global environmental problems that threaten mankind. These developments have made us realize that "we are living in a closed system called planet Earth."

At the same time, it became clear that action on a wide variety of problems is essential to resolve these issues, which are represented by inconsistencies in environmental impact control measures resulting from our fundamental relationship with the natural environment and by the differences in the degree of economic development between various nations known as the North-South divide.

Issues concerning the global environment cannot be resolved without research and development founded on cooperation and partnerships that transcend existing boundaries and frameworks. If the worst-case scenario we envisage becomes a reality, the greatest victims of these issues will be the coming generations, that is, humankind in the future.

With scientists, engineers and people in general sharing the conviction that "we should implement some measures against risks that have not yet become obvious and fulfill our responsibilities to future generations," we are able to support global environmental activities from their foundations.

Technological innovation in the 20th century created the paradoxical situation of "technology advancing at such a speed that the people who are to be the users of the technology cannot keep up." The rapid progress in information technology triggered by the spread of the Internet brought dramatic changes in the relationship between nations and their economies and in the everyday lives of individuals. In addition, advances are being made, such as in the development of new materials and nanotechnology, at a speed and frequency unprecedented in human history.

Science and technology have become a commonplace presence in our living environment and have steadily come to dominate our lives. At the same time, stresses are being imposed on us and we are accepting technological products that unconsciously we may not want.

As science and technology become hardly visible as the core of society, scientists and engineers must evaluate, adjust and change the technological innovations that are expected to emerge rapidly in the future paying consistent attention to the principles of human engineering (restoring man at the center of progress, rather than men making adjustments to adapt to machines).

Scientific progress has brought innovative technological advances in areas related to life. Especially in the cutting-edge fields of the life sciences, represented by genetic engineering, mankind is reaching into the mysteries of life, which have always been regarded as a divine realm.

In addition, discoveries in the human immune system and achievements in genetic engineering have not only brought academic progress but also applications in medicine and healthcare, including organ transplants and genetic treatments.

On the other hand, the people in developing nations who are suffering from poverty and starvation are often forgotten by those of us who live in industrialized nations. It is important to direct our efforts to narrowing the economic divide, protecting the environment and exploring new paths for national development to the lives of such people and also to all lives on the Earth.

Progress in life science technology potentially leads to human happiness. At the same time, these fields present problems with society and ethics regarding how to define what makes life human.