As a manufacturer of motorcycles and automobiles, Honda has been unceasing in its exploration of the idea of what role the motorcycle and automobile should play in society. Especially with safety, the company recognized the importance not only of the conventional approach of upgrading product performance, but also of active efforts towards safety education. Based on this awareness, Honda created its Driving Safety Promotion Center in 1970.

As the scope of its activities expanded, however, Honda recognized the limitations of these efforts by a single company. This led to the establishment of the Honda-Fujisawa International Association of Traffic and Safety Sciences （IATSS）. The objective of the Association is to explore the role of the automobile in society and the current state and future of our motorized society. The Association created opportunities for academic experts, intellectuals and representatives of industrial sectors to assemble, regardless of disciplinary boundaries, to engage in free discussion and research.

In the course of its activities to bring together experts from a broad range of fields including traffic and safety engineering, the Association realized the need for communication with other countries to promote its activities across a broader spectrum and thus organized the first DISCOVERIES＊ international symposium in 1976. Although the theme was "An Intelligent Human Approach to Traffic Problems," discussions took place over a broad range of fields beyond traffic and safety, across disciplines, and adopting an interdisciplinary and civilizational approach.

Its impact exceeded the Association's expectations, winning high recognition for its academic focus and theoretical approach to examining our civilization, and it seemed certain that the symposium would continue thereafter. The impact was felt deeply by, more than others, our founder Soichiro Honda himself. And, this was followed by the establishment of the Honda Foundation in 1977 as the organizing body for the DISCOVERIES symposia.

In 1979, the "DISCOVERIES Declaration" was announced at DISCOVERIES International Symposium 1979 in Stockholm. The declaration defined three objectives to serve as the basis of the Foundation's activities.

According to this Declaration, the Honda Foundation started the Honda Prize, which is an international award that honors individuals or groups that have achieved distinctive results in the field of ecotechnology, in 1980. Since then, the Foundation has been acknowledging the achievements of scientists and engineers that bring new value to the world.

In addition, the Honda Foundation started the Honda Y-E-S Award program for the excellent students in the field of science and technology in the countries of Asia in 2006 as a part of the 30th anniversary project. The scope of its activities expanded further into what it is today.

＊1. Definition and Identification Studies on Conveyance of Values, Effects and Risks Inherent in Environmental Synthesis. 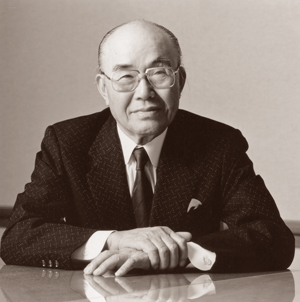 Born as the eldest son of a skilled blacksmith on November 17, 1906, he spent his early years in Komyo Village (currently, Hamamatsu City). From 1922, he worked for the automobile repair factory Art Shokai in Tokyo. He set up the Hamamatsu Branch of Art Shokai in Hamamatsu City in 1928, where he started an automobile repair service. Later, he started a new enterprise named Tokai Seiki and began development of various types of machinery such as the manufacture of piston rings.

After World War II, he sold all of his shares in the company and set up Honda Motor Co., Ltd., becoming its president in 1948. He was personally involved in internal combustion engine research and began the production of motorcycles. He later expanded into automobiles leading to the growth of the company as a leading Japanese business corporation. He resigned from the office of company president at age 67 and was appointed executive advisor. In December 27, 1977, he founded the Honda Foundation. He received the Grand Cordon of the Order of the Rising Sun for his long8me contribu8on to the industry. He passed away on August 5, 1991, at the age of 84.

He received the Medal with Blue Ribbon （1952）, the Order of the Polar Star from Sweden, the Legion of Honour from France, the Order of Leopold II from Belgium, the Holley Medal from the American Society of Mechanical Engineers （1980）, the Global 500 Award from the United Nations Environment Programme （1987）, the Gold Medal of the Federation Internationale de l'Automobile （1990）, and many others. He was the first Japanese to be inducted into the US Automobile Hall of Fame in 1989.

The award ceremony for the Honda Award takes place every year on November 17, Soichiro Honda's birthday.