The International Association of Traffic and Safety Sciences （IATSS）was established as a venue for free discussion and research to explore the role of the automobile in society and the current state and future of our motorized society. The first DISCOVERIES＊ international symposium was organized in 1976 to communicate with other countries and to promote its activities across a broader spectrum.

Its impact exceeded the Association's expectations, winning high recognition for its academic focus and theoretical approach to examining our civilization, and it seemed certain that the symposium would continue thereafter. The Honda Foundation was subsequently established in 1977 as the organizing body for the DISCOVERIES symposia.

The following is the "DISCOVERIES" DECLARATION that defined three objectives that serve as the basis for the Foundation's activities. The Honda Prize was established by this Declaration. The passages from the Declaration at the DISCOVERIES International Symposium Stockholm 1979 reflect the momentum building on the eve of its establishment.

＊Definition and Identification Studies on Conveyance of Values, Effects and Risks Inherent in Environmental Synthesis.

The ardent desire of mankind today is to create a civilization in which utmost respect is paid for the human being as such, and this will be possible only with mutual support and concerted action among the intellectuals of the world, especially among scientists and technologists.
The Honda Foundation, inspired by this philosophy, has sponsored the "DISCOVERIES" International Symposia, first in Tokyo, then in Rome, the cradle of civilization, and Paris, the capital of culture, and now in Stockholm, this serene guardian of academic and scientific achievement.
At these symposia we have discussed the catastrophe deemed inherent in modern civilization, recognized the megacrisis which will sooner or later confront mankind, and, in order that mankind may overcome that crisis, made comprehensive studies of the fundamental prerequisite for human activity, that is, information and communication.
The purpose of "DISCOVERIES" activity is to identify the real problems facing the mechanical and technological civilization of today, to discover the methodology which will enable us to cope with them, and to set a stage for the concentration of the wisdom of mankind on the task,
To achieve this purpose, we now declare that we shall:

1.Promote international technical cooperation for the establishment of Eco-Technology

The aim here will be the establishment of a technology which will truly serve humanity, Eco-Technology being a concept which includes appropriate technology.

It will be awarded each year to a person who has made an internationally recognized achievement in the field of Eco-Technology, with an additional prize of ten million yen (￥10,000,000) going to the same person.

These will continue to be held, as the need arises, in connection with the field of Eco-Technology.

In 1976, a year before the establishment of the Honda Foundation, an international symposium named "DISCOVERIES" was held in Tokyo.
The symposium presented the participants a strong awareness of what the basic problems in modern civilization are, what the technologies are, values and principles needed to overcome them and what microcosmic approach is necessary.
The impact was deeply felt by, more than others, the founder Soichiro Honda himself. DISCOVERIES was significant for Soichiro Honda in discovering the issues that he had thought of that need to be addressed in the mechanized civilization of today and in identifying clues to their resolution.
"I am captivated by DISCOVERIES activities. This is an area of practical learning oriented to world peace. I will devote my energy and passion into assembling human intelligence across national boundaries and creating a stage for our machine civilization to reemerge for the good of mankind and world peace."
This experience prompted Soichiro Honda to propose a new concept in empirical engineering—departing from conventional technology dedicated to greater efficiency and profit and focusing on technology in the true sense aimed at harmonizing human activities—and to realize the need for a promotional body. This led to the establishment of the Honda Foundation. 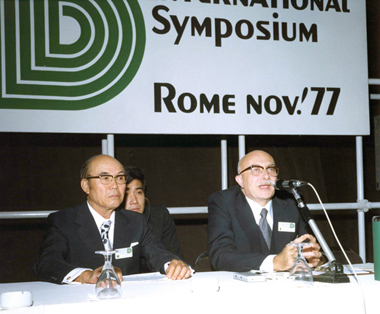 Soichiro Honda, a prominent figure in the Japanese industrial sector, established ties with the academic sector through "Sakkokai." This bond supports the activities of the Honda Foundation afterward. Sakkokai was established by Soichiro Honda and Takeo Fujisawa* in 1961 as a privately-financed foundation to subsidize young researchers working on low salaries.
The most distinguished feature of the fund was to keep where the money came from a secret to researchers receiving subsidies. Since its establishment, Sakkokai continued to provide scholarships anonymously to promising young researchers in Japan, leading to the rise of a large number of prominent leaders in various fields of science and technology. Until its closing in 1983, funding was granted to a total of 1735.
Among the recipients of Sakkokai funding was the astronaut Mamoru Mouri. Many other researchers have unknowingly established ties with Soichiro Honda and Takeo Fujisawa through Sakkokai, creating various ties with the Honda Foundation in interdisciplinary activities in subsequent years.
The spirit of Sakkokai continues to live in the Honda Foundation. In the 21st century, the Y-E-S Award has expanded its scope on an international scale, becoming a program of hope for our dreams to become reality through the young scientists and engineers of Asia building the future of our world. 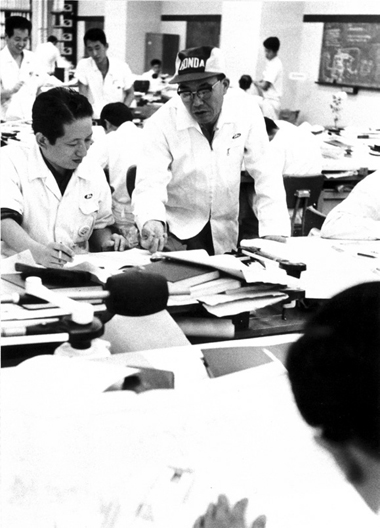 ＊As vice president and partner of Soichiro Honda, Fujisawa took charge of the management of Honda Motor and helped build it into a global company.