The award ceremony for the 5th Y-E-S Award in Vietnam took place at Hotel Melia Hanoi on December 15, 2010. Applications came from science and technology schools of six affiliated universities, and ten awardees were selected based on their performance records, interviews, and essays.
At the venue, the awardees were celebrated by more than 200 guests including their families and friends as well as the vice minister from NISTPASS and university officials. The ceremony was a gay gathering as the awardees took photos with their loved ones and received interviews by the media. Media coverage showed there was national attention to the YES Award program. Each awardee received a scooter from Honda Vietnam as an extra prize. 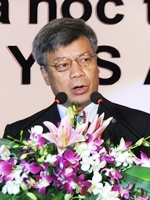 The Y-E-S Award has been helpful to develop an ideal environment to foster and deploy outstanding engineers and researchers throughout the country. This award is now considered by young, promising engineers and scientists as a springboard that leads to their future playground. After five years of its implementation, the award has attracted a lot of students from our six affiliated universities. There have been 330 students participating in the award and 50 students receiving awards. Therefore, the award has been received very high appreciation from our educational agency, media and social communities. I hope this award will help awardees following their dreams, reaching their goals and being a part of Vietnamese science and technology. We wish the students to be successful on their way you choose. 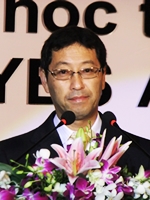 This is the 15th year for Honda Viet Nam (HVN). With the motto, "Be a company that the society wants it to exist", we have not only delivered high-quality products but engaged in other activities to help develop the Vietnamese society. Because education determines the future of a country, HVN has focused its efforts on educational support, and the Y-E-S Award is a very successful outcome. The award, marking its 5th year with help from NISTPASS and the Honda Foundation, has become a prestigious prize that many Vietnamese students aim to win as one of their biggest goals. I hope the award will continue to be a great encouragement for young talents.