The 136th
"Cellulose Nanofiber: Both Resources and Knowledge Found in Japan"
December 7, 2015 at Courtyard by Marriott Tokyo Ginza Hotel

As a specialist in wood materials, Dr. Yano has been conducting research into cellulose nanofiber (CNF), which has been drawing public attention as a plant-derived high-performance material. With his success in developing a CNF-based transparent material for the first time in the world, he has now become the top authority in the field.

Materials such as steel and plastics, which are used in many industrial products, are cheap to process. However, their production consumes huge amounts of energy and generates CO2. In today’s society, which is exploring the transition from wasteful consumption of Earth’s resources to a society that is dependent on solar energy, Dr. Yano believes that CNF made from wood and plant fiber will become an important material to replace petroleum-derived materials.

All plant cells share the basic "nanofiber” structure. When used as a raw material, it is lighter and more durable than steel and plastic. He explained that mass production of CNF from Japan's forests, which cover 70% of the country, would contribute immensely to both the Japanese economy and local industries.

Awed by the discovery that leading-edge materials can be created from materials close to our lives, such as wood and plants, he received such a large number of questions from participants that the session continued far beyond the scheduled closing time.

Dr. Hiroyuki Yano
Professor, Division of Creative Research and Development at the Humanosphere, Research Institute for a Sustainable Humanosphere 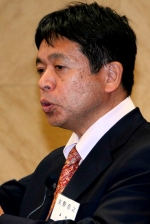 The 135th
"Getting to know the Middle East, Arabs and the world of Islam: Greater understanding of the Arab world"
September 10, 2015 at Courtyard by Marriott Tokyo Ginza Hotel

Dr. El-Moamen Abdalla is a researcher in linguistics, chiefly in the comparative study of the Japanese and Arabic languages. At the same time, he serves as an Arabic-Japanese interpreter for the Emperor of Japan and for VIP guests from various Arab countries and teaches foreign people who hope to become teachers of the Japanese language.

The Middle East refers to the region including Turkey, Yemen and Egypt with Iran at the easternmost end. The term Arab refers to the peoples who speak Arabic.Islam is the name of the religion. In Japan today, these terms are being treated as roughly synonymous, suggesting that the basic understanding of the Arab world has not improved, according to Mr. El-Moamen Abdalla.

Referring to the caricatures published in newspapers in other countries, he also reported the sense of despair that is permeating among the Arabs, amid terrorism and religious and ethnic conflicts that are erupting simultaneously. He warned that Japanese society is exposed to unbalanced media reports heavily bent towards coverage of Islamic terrorists and that it must "gain a greater understanding of Islamic culture, since Muslims now account for one quarter of the world population and it has become a culture that cannot be ignored."

The lecture, which was a great success, proceeded in Q&A form, drawing a large number of simple and naïve questions regarding the Arab world from the audience. 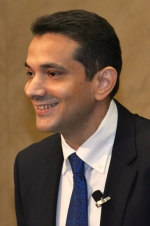 Dr. Furukawa has been working on the "90-Year-Old Interview" activities since 2009, interviewing senior citizens aged around 90 regarding their living of the past and finding clues to sustainable lifestyles.

The people aged around 90 today reached adulthood before World War II and reached age 40 in 1960, when energy consumption was half of that today, with recollections of living in coexistence with nature. Dr. Furukawa explained that the study into living at that time, which showed a sense of content despite severely restricted conditions, will spread the potential of sustainable lifestyle design adapted to global warming and other changes in the global environment.

As examples, he presented the efforts of the Iga-yaki pottery master who builds in various functions in a single object and of a restaurant that actively uses kintsugi or gold joint to repair ceramic and earthen dinnerware. He expressed his hopes on the birth of technology that turns constraint to contentment of mind.

The 133rd
"UT-Heart, the Multiscale Multi-physics Heart Simulator"
March 20, 2015 at Courtyard by Marriott Tokyo Ginza Hotel
For well over ten years, Dr. Hisada has been working on the development of a computerized model of the human heart, the ceaselessly functioning organ, with precision from the molecular level, and on simulating its function by integrating protein molecule movement into heartbeats.

The heart continues to beat uninterruptedly for more than 80 years. Notwithstanding its size, which is comparable to a clenched fist, in one lifetime it pumps enough blood to fill a giant oil tanker.

The lecture spotlighted UT-Heart, the human heart simulator that Dr. Hisada's team developed, showing that research has not only contributed to basic medicine but has also reached a stage approaching actual application to medical practice. The presentation described the research activities that led to greater precision in simulation through the simulation of highly complex heart surgery conducted in the past and verification of the validity of the surgical approach.

He added also that the simulation is not aimed at reproducing physical phenomena, but is a technology for making bold predictions in conducting meaningful experiments, referring to its contributions to the development of drugs and medical devices such as the defibrillator.

Employing video to show with clarity the complex mechanisms of the human heart, many in the audience were seen nodding in understanding. He received a large number of questions after the presentation.

*Please note that this lecture's report and video will not be released in consideration of many clinical application samples with personal information in this lecture. 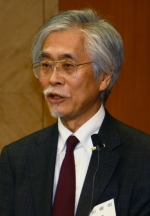