"CASE and MaaS Change the Future of the Automotive Industry"
September 17, 2019 at Courtyard by Marriott Tokyo Ginza Hotel

The automotive industry is said to be on the threshold of a once-in-a-century revolution. Through CASE—acronym for "connected" (connecting vehicles), "autonomous" driving, "sharing" vehicles and "electricity"—the industry is about to transition from an industry centered chiefly on manufacturing to one focused on service offering "mobility as a service" or MaaS. Dr. Nakamura conducts research into the future of the automotive industry through CASE and points out that although these four major themes interact with each other, synergy between autonomous driving and sharing is expected to bring dramatic innovation. At the same time, he warns against regulatory action taking the initiative in the transition to electric vehicles (EVs), where the rules are founded on competition between nations to grab leadership in the area, rather than advances propelled by technological innovation and market needs. He forecasts that the EV industry will undergo a transformation, with electronic devices gaining increasing importance in manufacturing, shifting from the existing hierarchical structure with the assembler at the top to a more distributed structure where work is allocated horizontally among companies. He argues that Japanese businesses must depart from activities based on rules and engage in business structured in a form that is advantageous to themselves. 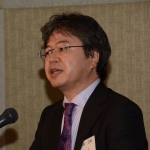 "Breakthroughs in Long-term Unsolved Problems in Science Using Ideas Based on the Fundamentals of Organic Chemistry"
June 5, 2019 at Courtyard by Marriott Tokyo Ginza Hotel

Dr. Ohrui, who specializes in organic biochemistry and analytical chemistry, reflected on his research activities, saying that “a shift in perspective and thinking is important” and that he “engaged in research in the search for approaches not found by others.” The first example he cited was the treatment of human immunodeficiency virus (HIV) infection. The problems involved in patient treatment with anti-HIV drugs include HIV becoming resistant to those drugs, weakening their potency, and their serious side effects. The modified nucleoside EFdA (4’-ethynyl-2-fluoro-2’-deoxyadenosine) that Dr. Ohrui developed proved to be able to prevent HIV from becoming drug resistant, as well as having a potent effect on existing drug-resistant HIV. It is a dream drug that causes few side effects. The key to the successful creation of the drug was the hypothesis that a treatment drug with a low toxicity for humans could be created by focusing on the fact that substrate selectivity is more rigid for humans than for the virus. Dr. Ohrui also worked on problems with the diastereomer method, which is employed in the separation and identification of optical isomers with identical physico-chemical properties, that had remained unsolved for more than a century—that “it seems impossible to discriminate between diastereomers that have chiral centers separated by more than four bonds.” This was resolved with the development of an innovative, super-high-performance chiral discrimination method, in which chiral centers of the molecule analyzed are identified as diastereomers directly bonded to the chiral conformer. 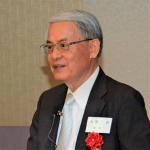 "The Sun and Life on Planets"
March 12, 2019 at Courtyard by Marriott Tokyo Ginza Hotel

As a researcher in solar physics and space astronomy, Dr. Tsuneta was involved in the development of a solar observation satellite in the 1990s through 2000s. Presently, he leads major observation projects such as the Subaru Telescope in Hawaii and the ALMA Observatory in Chile and is an authority that catapulted astronomy in Japan to the world-class level. The key to progress in astronomy is improvement in telescope performance, which has been realized by technology development by the National Astronomical Observatory of Japan (NAOJ). Japan's giant telescopes that achieved outstanding light-gathering power and resolution brought dramatic expansion in the scope of astronomical research, according to Dr. Tsuneta. For instance, the method of measuring the time a trans-Neptunian object hides a star and the star's brilliance to confirm its presence, known as occultation, was achieved by higher telescope performance. Dr. Tsuneta explained that these celestial bodies are observed to find the origin of planets. They can be considered "eggs" of planets, containing materials that make up planets and information on them. Today, the mainstream belief in astronomy is that the Earth is not the only existence in the university where life exists. To prove this, NAOJ is participating in a five-nation 30-meter telescope project. If an environment for life is found in a planet outside the solar system, Dr. Tsuneta believes that the existence of lifeforms similar to humankind will become a new theme of study, pointing to the future of astronomy. Dr. Saku Tsuneta Director-General, National Astronomical Observatory of Japan, 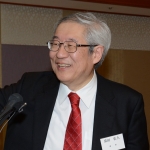 Dr. Akiyama’s field of expertise is gerontology, the study of the social issues that emerge with human aging, a highly interdisciplinary field involving medicine, psychology and sociology combined with philosophy, economics and political science. Being one of the earliest countries in the world to face the problems of an aging population, Japan has the potential to become a top runner in the field. In "Redesigning Communities for the Aging Society," an experimental social research project Dr. Akiyama conducted in the existing urban community of Kashiwa City in Chiba Prefecture, workplaces were created in areas that are accessible from home on foot or by bicycle, to cater to senior citizens seeking to participate in society. The scheme, which offers work with the freedom to match one's physical strength and personal convenience, provides a new work style that enriches the lives of people after retirement in the age of the 100-year lifespan. Dr. Akiyama is involved in the Kamakura Living Lab, a joint development project to create a platform for the goods and services required in a society oriented to a longer lifespan. The project involves industries, governments and universities working together with citizens (users) to develop furniture for home offices and new mobility devices for senior citizens. Presenting some of these activities as examples, Dr. Akiyama highlighted the prospect of creating businesses and core industries in Japan through innovation founded on the theme of the aging society.