The 132nd
"Learning in Innovative Manufacturing from Sake and Soba—Japan's Resurge as a Leader of Technology"
December 2, 2014 at Courtyard by Marriott Tokyo Ginza Hotel
Professor Fukukawa has long been involved in research into automobile and robot control technologies at Honda R&D Co., Ltd.

After spectacular growth as a leader of technology in the postwar period, manufacturing in Japan has not come up with any significant accomplishments in recent years. He sees the cause in the development and manufacturing processes in which wastefulness has been eliminated systematically in the drive toward ultimate efficiency. He warned that the Japanese character that focuses on taking time and paying careful attention to detail contradicts the current direction in manufacturing.

He mentioned Japan's sake-making technology as a case in point, presenting its history of adopting the production method from mainland Asia, developing it through practice and application of collective intellect and optimizing it slowly over time to blend with the Japanese climate. He argued the importance of shifting from "competition" to the concept of "collaborative creation" and "slow engineering," allowing slack in managing technology development and room for more playful creativity.

In the reception that followed the Q&A session, Professor Furukawa and volunteers distributed homemade soba noodles and Japanese sake to the audience, enlivening the atmosphere as discussions took place over the theme of harmony between Japanese traditional culture and technological innovation.
Dr. Yoshimi Furukawa
Professor, Graduate School of Engineering and Science, Shibaura Institute of Technology 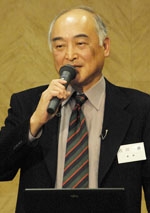 The 131st
"The Growth Potential of the Japanese Economy: The Potential and Issues Surrounding Abenomics"
August 26, 2014 at Courtyard by Marriott Tokyo Ginza Hotel
After working as a news reporter for the Nikkei Inc., Mr. Kojima has been actively involved in research across a wide spectrum of economic conditions in Japan and overseas, as advisor to the Japan Center for Economic Research.

The economic policy of the Shinzo Abe administration, known as Abenomics, is attracting worldwide attention. While the Japanese economy suffered a prolonged slump after the collapse of the economic bubble referred to as the "Two Lost Decades," other nations implemented bold economic measures, according to Mr. Kojima.

Since the Abe administration came to power, stock prices have started to recover, indicating that the "Three Arrows" fiscal stimulus policy is showing a measure of success. To make economic recovery a reality, he argues that technological innovation is essential. However, he explained that by innovation, he is pointing to its fundamental meaning of "creating added value through technological innovation," rather than to the innovative qualities of individual technology. He emphasized that the success of the structural reform that is the third target of Abenomics depends on innovation.

Due to the current interest in the theme of economic recovery and development, the presentation drew a large audience, and he received a large number of questions to answer, exceeding the allocated time.
Mr. Akira Kojima
Advisor, Japan Center for Economic Research 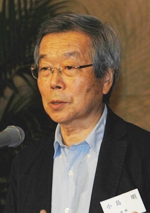 The 130th
"Understanding the Earth's Violent Behavior - A new approach to taking action on earthquake predictions"
June 30, 2014 at Courtyard by Marriott Tokyo Ginza Hotel
Dr. Sakaguchi is attracting great attention as a researcher to develop an earthquake prediction method utilizing his expertise in granular dynamics.

Although the dynamic cause of earthquake is believed to be heat accumulated inside the planet, to this day it has proved impossible to directly observe the movement. Dr. Sakaguchi has pointed out that the seismograph is only able to analyze data after an earthquake has occurred, and that the relationship between premonitory phenomena represented by abnormal animal behavior and earthquake occurrence remains unclear. Due to the difficulty in conducting verification tests, it is difficult to regard earthquake prediction as a science.

For this reason, he believes that the use of underwater lasers able to measure the "wrinkles" that appear on the surface of ocean plates prior to an earthquake in units of 1/1000 mm raises the possibility of earthquake prediction. Due to the many issues involved in practical application, he stated that this is a prime opportunity for innovation presented by the integration of new technology into earthquake prediction research, as well as for possible application in other areas, and urged that a maritime nation such as Japan should focus on the development of underwater lasers and related technologies.

The lecture on earthquakes, which pose a highly probable threat from nature for Japan, attracted a large number of participants and stimulated lively discussion in the Q&A session.
Dr. Hide Sakaguchi
Director, Department of Mathematical Science and Advanced Technology, Japan Agency for Marine-Earth Science and Technology (JAMSTEC) 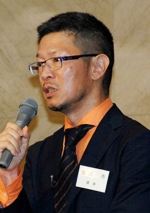 The 129th
"Royal Blue Tea, Tea of Self-continual Production for Innovating Japanese
'Omotenashi': Market Development by New Tea Culture"
March 4, 2014 at Tokyo Kaikan
Ms. Yoshimoto is president of the company which manufactures and sells high-quality Japanese tea priced at several tens of thousands of yen. The company has grown to such an extent that the products are served to first class passengers on overseas airlines or at fine restaurants with three Michelin stars. Ms. Yoshimoto herself has also attracted attention as female entrepreneur.

She was very touched and felt compelled to convey the real taste of Japanese tea to the world, she said. She also felt a sense of mission to save the farmers who cultivate these high-quality tea leaves who have had a hard time as plastic bottles of tea have become popular, and this motivated her to start the business. Subsequently she introduced the company's considerable efforts to achieve this mission: the novel idea to use wine bottles to bottle Japanese tea in so that the same taste could be offered to hundreds of people at the same time, creating extraordinary occasions at which both people who drink alcohol and those who don't are able to enjoy themselves equally. 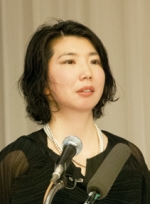