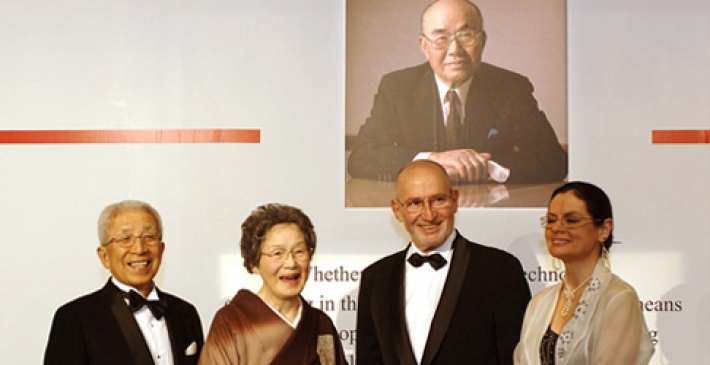 (from left to right)
President Kawashima, Ms. Sachi Honda, and Mr. and Mrs. Mouret
The ceremony was held on Monday, November 19, at the Imperial Hotel Tokyo, with 240 participants and guests from the French Embassy, universities, research institutes, and press.

This year’s laureate is Dr. Philippe Mouret, a private surgeon from Lyon, France. He is recognized for his success in the world-first practical operation of laparoscopic cholecystectomy in 1987, which led to rapid spread of endoscopic surgery and its related technologies. 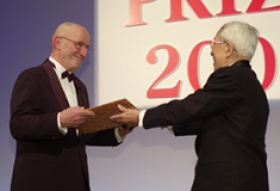 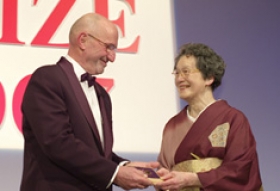 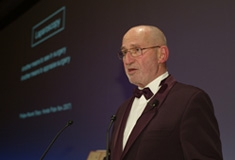 Dr. Mouret delivering speech on laparoscopy
I like my job; still I hate its aggressiveness. Surgeon is convinced more or less that he achieved the operation. Wrong! It’s the nature which makes the healing definitive, not the surgeon. His first duty is to not hinder its works. So for me laparoscopic surgery is not a “new” surgery; rather it is another way to appraise classic surgery for reducing its aggressiveness.
I am sure the two will reach a complementary relationship if surgeons and industry stop to consider only the vertical development of complex procedures and technologies, for laparoscopic technique, like any other novelty, is quite operator dependent.

A full transcript of Dr. Mouret’s commemorative speech will be available soon on this website as well as in print as a HOF report.

Mr. Gildas Le Lidec,
French Ambassador to Japan
Dr. Mouret developed his laparoscopic technique based on his guiding principle that surgery and technological innovations should first benefit the patient. Within only two years after his first procedure, his technique was adopted in the USA and then catapulted to a worldwide practice. We French people are proud of him.

Dr. Ichiro Kanazawa, President of
Science Council of Japan
Endoscopic surgery not only benefits the patient, but improves the economy of medical care. It is used in more than 60,000 operations annually in Japan, and is being applied to cancer treatment. I am unstinting in my praise for the greatness of what Dr. Mouret has achieved while doing everyday practice in his clinic. 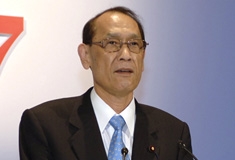 Mr. Kisaburo Tokai,
Minister of MEXT
I first met people from Honda Foundation at an international meeting in India last February, which they planned to promote technologic innovation. I delivered a keynote speech about relevant Japan’s science and technology policy. Dr. Mouret’s lonely yet brave battle for the reform in surgery through endoscopy reminds me of the “Honda Spirit,” a spirit of challenge that brought Honda today’s success. I have great respect for his unrelenting efforts. They have made a lot of people happy as a result.