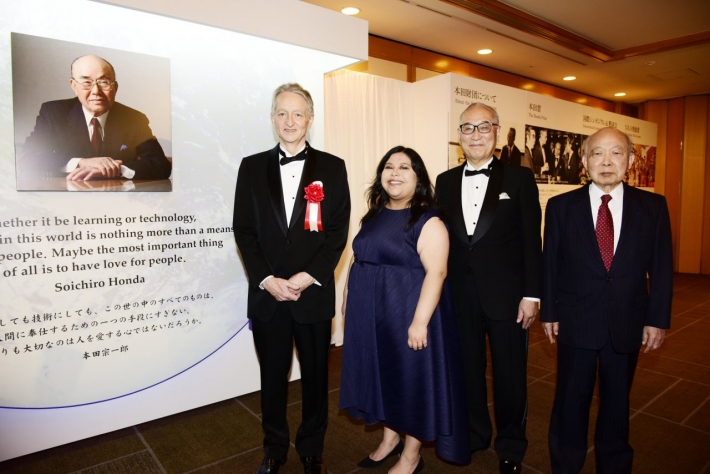 (from left to right)
Dr. Geoffrey E. Hinton / Ms. Emma Hinton, Daughter / Mr. Hiroto Ishida, President of Honda Foundation / Mr. Kunio Nakajima, Vice President of Honda Foundation
The 40th Honda Prize ceremony has been held on Monday, November 18, at the Imperial Hotel Tokyo, with 230 guests such as officers of foreign Embassies in Japan, policy makers, scholars, researchers and media people.
This year’s laureate is Dr. Geoffrey E. Hinton, Professor Emeritus, the University of Toronto and Chief Scientific Advisor, Vector Institute, for his pioneering research in the field of deep learning in artificial intelligence and his contribution to practical application of the technology.

Commemorative Speech by the laureate: 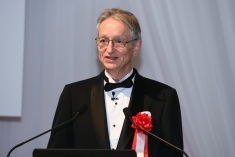 Today, I would like to mainly explain how deep learning actually works.
Artificial Intelligence (AI) is any mechanical or artificial means of performing intellectual or cognitive acts that previously could only be done by humans. There are in fact two categories of artificial intelligence. The original concept of AI was symbolic AI, in which information such as formulas and rules are input to perform logical judgments. The second type of AI, connectionist AI, takes a biological approach, borrowing concepts from the brains of living creatures. This approach studies deep learning using neural networks.
Deep learning is defined as machine learning using neural networks. A learning procedure breaks down information, then analyzes and confirms characteristics to identify what is represented there, in order to recognize objects, etc. When the neural network makes a mistake, it reflects the error in revisions to its identification criteria and continues learning.
As long as the system has sufficient data, it can continue steadily improving its accuracy.
It learns by understanding concepts of things, like humans do. Deep learning learns each concept from scratch, so all humans have to do is give it the name of the thing they want it to learn. It is “the beginning of machines having independent intelligence.”
Eventually, computers became fast enough and datasets became large enough to make big neural networks practical. With a few technical improvements, deep neural networks implemented by my graduate students at the University of Toronto then conquered speech recognition and image classification in a period of just a few years and the deep learning revolution was underway. 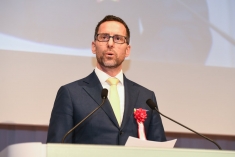 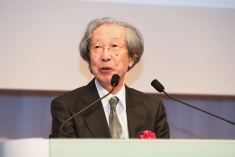 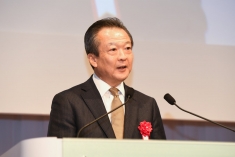 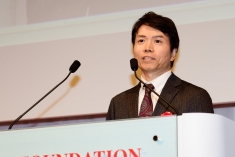