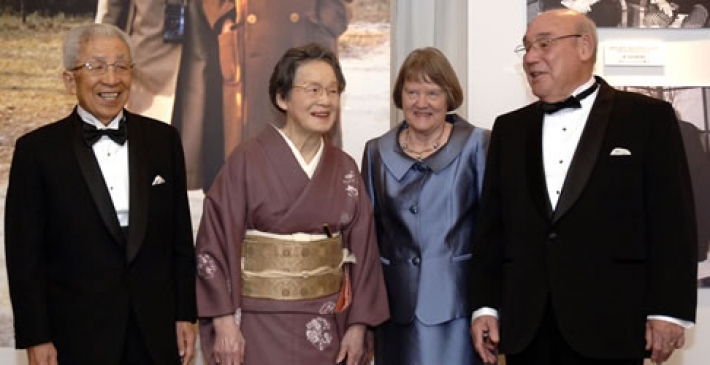 (from left to right)
President Hiromori Kawashima, Ms. Sachi Honda, Ms. Katherine Nelson, and Dr. Richard Nelson
On Friday, November 17, we hosted the Honda Prize 2006 Award Ceremony at the Imperial Hotel Tokyo. It was a grand, international ceremony with more than 270 guests, including embassy officials from the United States and other eight different countries, taking part.

This year’s laureate is Professor Emeritus at Columbia University Dr. Richard Nelson who is currently director for the Center for Science Technology and Global Development at Columbia’s prestigious Earth Institute. He received the prize diploma from President Kawashima and the medal and money prize of 10 million yen from Ms. Sachi Honda. 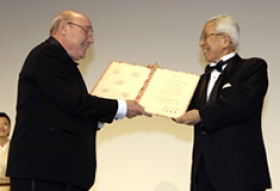 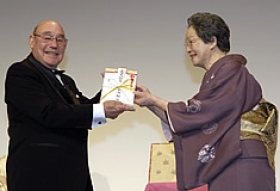 “On the Uneven Evolution of Human Know-how” 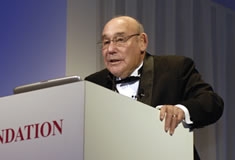 Laureate Speech; Dr. Nelson
Coauthor of a groundbreaking book "An Evolutionary Theory of Economic Change," Dr. Nelson in response delivered a commemorative lecture titled "On the Uneven Evolution of Human Know-how," based on his historic understanding, one of the reasons for his receiving Honda Prize, that the growth or deterioration of a given industry or economy has been significantly impacted not only by advances in science and technology but also by innovations in social institutions. 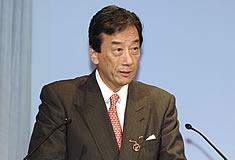 Dr. Kiyoshi Kurokawa
Special cabinet advisor of Japan
Several guests delivered congratulatory addresses. The ceremony was felt especially timely when Dr. Kiyoshi Kurokawa, the special advisor on science, technology, and innovation to the Abe Cabinet that was formed earlier this year, remarked: "I believe there is quite a lot to learn from Dr. Nelson’s broad perspective on innovation for realizing solutions to the diverse issues facing us today. And I hope Japan’s economy will thrive on such broadly-defined innovations." Dr. Kurokawa is highly expected for his leadership in the Innovation 25 office to assist Minister Sanae Takaichi in charge of science, technology, and innovation.