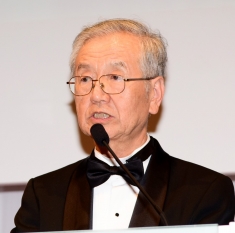 At Tohoku University, I joined the semiconductor research unit led by the well known scholar Jun-ichi Nishizawa. He was a Honda Prize laureate in 1986, and at the time had applied for more than 100 patents. I helped him prepare patent reply and other documents, and was thus able to learn something about the nature of patents and how to write their descriptions. That enabled me to submit applications for 5 patents in my first year after joining Toshiba in 1971. Thereafter, they were also registered as U.S. patents, and Toshiba was able to obtain free cross licenses with U.S. Intel. One of the U.S. patents enabled use of all of Intel’s patents free of charge.

In the 1980s, the market for magnetic disks and tapes was far larger than that for DRAM and other semiconductor integrated circuits. If semiconductor memory could be a substitution for the disks and tapes, that industry could be seen as developing dramatically. Flash memory was conceived, and domestic and overseas patents were obtained.

Flash memory is inexpensive, light, low in power consumption, high in reliability, and easy to use. It is diffusing to cell phones as well as digital cameras, and is also used in aircraft voice recorders, automotive engine controls, robots, computers, household appliances, and almost all other electrical products. By now, the USB memory has completely rendered floppy disks redundant and is replacing magnetic hard disks. The explosive diffusion of cell phones using flash memory derives from its non-volatile property—memory is not lost even when power is cut off—and the fact that electricity consumption is extremely low: magnetic hard disks require battery capacity more than 1,000 times higher than cell phones.

The semiconductor industry’s rise began in 1947 with the invention of the transistor by the U.S.’s Bell Laboratories. Over the more than 60 years since then it has continued to grow, supported by three innovative technologies: substitution of the transistor for the vacuum tube, substitution of the DRAM for magnetic core memory, and substitution of flash memory for magnetic hard disks and floppy disks. For the semiconductor industry to grow further over the coming decades, a fourth innovative technology is necessary. I am convinced that it will be Japan-originating 3 dimensional Surrounding Gate Transistors (SGT).

Flash memory’s multifaceted development and progress has been enabled by the diligence and mutual encouragement of many friends during my time at Toshiba, and by the cooperation of the staff and students of the research unit since I joined Tohoku University. To all of them I express my deepest appreciation. 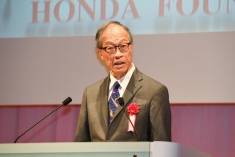 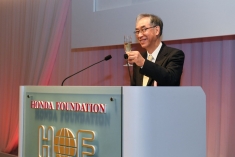